Take a blast to the past as we explore our history, decade by decade. What traditions have stuck?
What fashion trends have returned? What games do we still play? A lot can happen in 100 years! 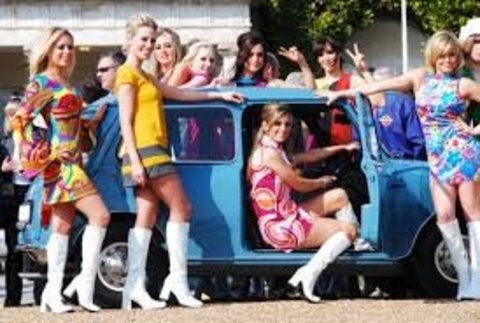 Fashion became progressively more casual across all genders and ages. Women’s wear followed 3 broad trends: a continuation of the previous decade’s ladylike style of Mary Quant and the Space Age influence, and the late 60s Hippie style. Menswear saw an increasing amount of color and pattern, military influence, and new fashion icons in the form of rock stars!

The dance styles brought to us in the 60s were as “original” as they come. The Twist, the Mashed Potato, the Hully Gully, and the Madison all started with one goal in mind: to liberate and recreate the way the world danced. The Twist, made famous by Chubby Checker, took its first step in 1960.

Visual art, movements such as Pop Art, Psychedelic Art, Op Art, Minimalism, Conceptual Art, and the appearance of Happenings, became the most significant and shape-shifting concepts of the 1960s art world.

Our Art Throbs Club will be painting famous artwork by Andy Warhol and sketching fashions of the decade.